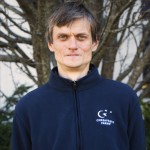 Research Program: Presently, humans posses a vast arsenal of different pest control techniques, ranging from synthetic insecticides to natural enemies, and from transgenic plants to quarantine regulations. What is lacking, however, is a good understanding of the ecological consequences of their implementation for both target and non-target organisms. When a particular action is taken, whether it is an insecticide application, planting of a transgenic cultivar, or release of a biological control agent, it is imperative that we can forecast the sequence(s) of events it might trigger. Limited-scale toxicological and host-range assays, still commonly used for decision-making, often do not reflect actual developments in the field. Therefore, a more sophisticated approach, which takes into account an intricate web of cause-and-effect events within a given ecosystem, is required to achieve a long-term success both in pest control, as well as in conservation of beneficial organisms. Most ecological systems are very complex, and their good understanding is extremely difficult. However, sustainable development of the human civilization is hardly possible without such an understanding. As a scientist, I hope that my research will contribute to building a knowledge-based foundation for predicting effects of human intervention in insect communities. I am also interested in more theoretical investigations of factors responsible for growth and diversity of insect populations.