Chris Tonra has been a lover of wild birds since the age of 12 growing up on Long Island, NY. This fascination with birds led Chris to pursue a career in ornithology, eventually receiving a Masters of Science in Wildlife Ecology from Humboldt State University in California. During his time in California, Chris became interested in how birds interact with their habitats and how these habitats may limit the fitness of individuals. This ultimately brought Chris to the doctoral program in Biological Sciences at UMaine and the Lab of Avian Biology, led by Dr. Rebecca Holberton.

Migratory birds interact with multiple habitats throughout their life cycle, sometimes spanning thousands of miles between tropical wintering grounds and temperate breeding grounds. Along with Dr. Holberton and his co-advisor, Dr. Peter Marra of the Smithsonian Institution’s Migratory Bird Center, Chris has been conducting a study examining the mechanisms by which conditions in tropical wintering habitats of migratory songbirds carry-over to limit reproductive success in the temperate zone, primarily focusing on the American Redstart. Chris has been conducting fieldwork both on the wintering grounds in Jamaica, West Indies and on the breeding grounds at the Hubbard Brook Experimental Forest in the White Mountains of New Hampshire. His project has utilized both experimental and observational studies of captive and wild birds to determine how male songbirds balance the enormous feat of migrating thousands of miles in spring with the equally demanding task of undergoing a dramatic physiological transition from a non-breeding to a breeding state. This work utilizes various tools to examine songbird physiology by both measuring natural levels of breeding hormones and experimentally manipulating hormone levels. Chris is also using stable-isotope analysis of various bird tissues. This tool uses predictable geographic patterns in different forms of the elements carbon and hydrogen to gain information about where birds have been and even where they are going. 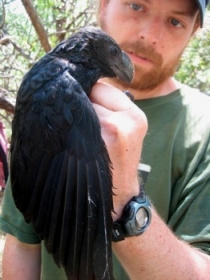 Thus far Chris’ work has demonstrated that the timing and magnitude of testosterone release in males prior to arrival at breeding areas is an important driving factor in the phenology of migration. This is an important finding as the timing of arrival at the breeding grounds is a key driver of individual fitness in migratory birds. He has also demonstrated that the condition that birds are in prior to departing tropical wintering grounds is not only correlated with winter habitat quality, but also with breeding hormone levels prior to spring departure. It appears that, much like athletes’ use of androgens, such as testosterone, enhances their performance at their sport, male birds may utilize these same chemicals to enhance their performance in migration.

Chris has received a National Science Foundation Dissertation Improvement Grant and a fellowship from the Smithsonian to support the final year of his doctoral work at the National Zoo in Washington, D.C. During his time there, Chris will continue to examine these questions and expand upon them by including data collected from other species of birds during migration. This work is part of an ongoing effort by a number of ecologists to better understand how and where migratory bird populations are limited, such that those managing these populations can focus on “full life-cycle stewardship” to more effectively ensure population persistence. Upon completion of his doctoral work, Chris plans to continue working on carry-over effects in migratory animals by expanding these ideas to other taxonomic groups, such as migratory mammals and amphibians.