Allie Byrd was fascinated by the natural world at a young age and her interest in wildlife lead her to pursue a B.S. degree in Wildlife Biology at the University of Rhode Island. Upon graduation, Allie worked on research projects with numerous species ranging from black bears to brook trout, but a field job in Australia got her hooked on bird research. Subsequent avian positions allowed Allie to research various species across the globe. After gaining experience in the field, Allie decided she would like to implement a study of her own and began her Master’s work with Dr. Brian Olsen at the University of Maine. 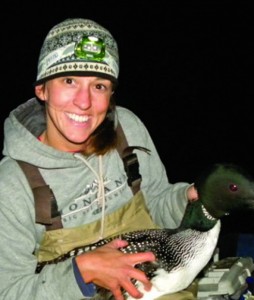 The primary goals of Allie’s research are to understand the vulnerability of New England’s common loon (Gavia immer) to climatic change and to use this information to suggest current and future management actions. Over the next century, expected changes to freshwater ecosystems include increased amount and variability of precipitation, increased lake level fluctuation, earlier spring run-off, and extended drought periods. Effective and appropriately prioritized conservation actions in an era of changing climate require accurate, predictive models of the demographic mechanisms behind range contraction and expansion.

Allie’s project will combine demographic analysis, physiological measures, and behavioral observations across a range of climatic conditions to predict how future alterations to lake characteristics may impact loon distributions. The results of this study will contribute to the demographic model of the common loon which will predict the conditions under which Maine is likely to lose this iconic species. This information is critical for their conservation and continues the University of Maine’s long tradition of managing the state’s natural resources.

Allie began her M.S. at the University of Maine in 2009. After the completion of her thesis, Allie plans to continue avian research and hopes to effect change through work with a non-profit agency.