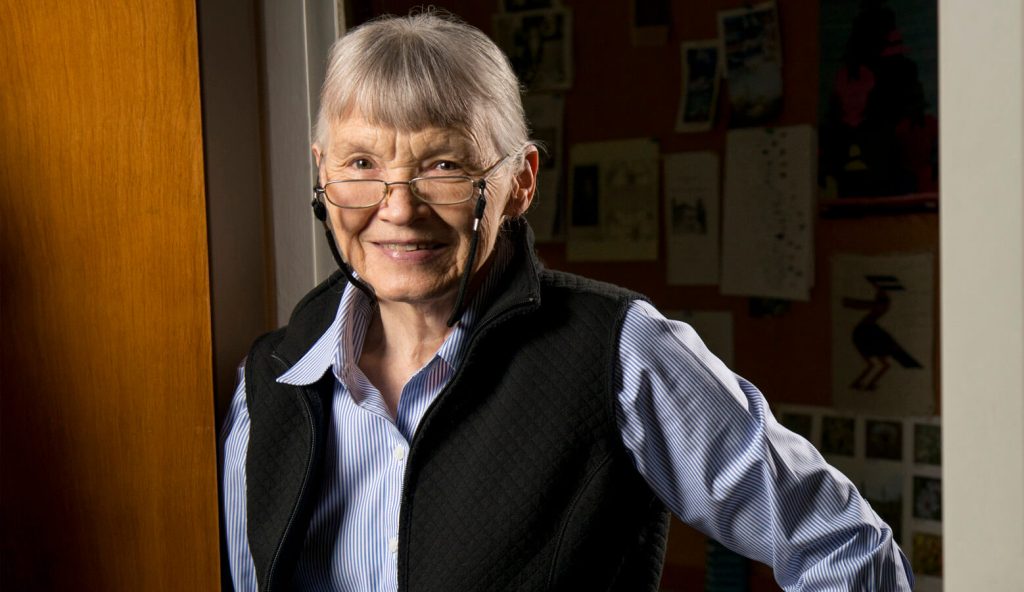 The Distinguished Mycologist Award is one of the highest awards bestowed by the MSA, and it is designed to recognize individuals that have a truly distinguished career in the field of mycology in terms of either research or service.

Joyce E. Longcore graduated with a B.S. in biology from the University of Michigan in 1960 and stayed on an extra year as a research assistant to Dr. F.K. Sparrow, the author of “Aquatic Phycomycetes”. She received a M.A. in Botany from Indiana University in 1963, and worked for Dr. Sparrow for another year before marrying and moving to Maryland, where she continued to work for Sparrow in the lab of his former student Robert Paterson at the University of Maryland. She dropped out of academia when her first son was born and became a stay-at-home mother for the next 17 years, during which time the family moved to Orono, Maine, home of the University of Maine. The mycologist at Maine was Richard Homola who knew her from the University of Michigan, where he had been Alexander Smith’s student. When he was advising a graduate student who needed help on isolation and identification of fungi, including “Phycomycetes,” he suggested contacting Joyce. She agreed to help, and once she looked through the microscope again, remembered what she was meant to do. To continue working with zoosporic fungi, she became a “non- traditional” graduate student and began to attend MSA meetings. There she met Donald Barr, who invited her to his lab in Ottawa to learn transmission electron microscopy techniques. TEM of zoospores yielded characters that enabled chytrid specialists to realize that morphology available by light microscopy was not revealing the true diversity of the Chytridiomycota. Longcore received her Ph.D. from the University of Maine in 1991. With firm roots in Orono and no prospects for a job, she occupied part of Dr. Homola’s lab and continued isolating chytrid fungi and publishing research papers.

In the 1980s, scientists began to notice frog die-offs, particularly in Australia and Central America. Donald Nichols, a pathologist at the National Zoological Park, also had seen some frog deaths and was on the lookout for material to determine the cause. When some poison dart frogs at the zoo died, he preserved them and had some electron microscopy photos taken of the skin. Mel Fuller, at that time had started a “Zoosporic Fungi” web site. Allan Pessier, then Nichols’ intern, found this site and, because they suspected fungi as a cause of the frog deaths, he asked him to look at the photomicrographs. Mel did, and sent them on to Joyce; they agreed that one of the photographs definitely showed a chytrid zoospore.

This was 1997 and Longcore had been isolating chytrids for about 10 years. Her immediate response to the pathologists at the National Zoo was to ask for a sample that she could examine. The sample was a bit old but the infection was visible, so she asked for a fresher sample. It arrived in a FedEx package and, using her usual techniques, she attempted to grow the fungus. Not much luck; on one piece of skin several zoosporangia grew, but then proceeded no further. So she transferred these zoosporangia on a tiny bit of agar into a flask of liquid medium and more or less ignored them. She came to the lab one Sunday and noticed that the liquid in the flask was opalescent. Either bacteria had taken over or the organism had grown. She made a slide and was elated to find that the organism had grown. This led to the description of Batrachochytrium dendrobatidis in a 1999 issue of Mycologia. Now the unemployed chytrid mycologist received invitations to teach Bd isolation techniques around the world; she visited Australia, South Africa, Brazil, Panama, and Costa Rica as well as teaching students from Brazil, Mexico and the US in her lab.

The first use of rDNA sequencing to learn the phylogeny of chytrids was published by James et al. in 2000. Longcore’s isolates were an important a part of this study. She has continued to isolate chytrids and their use in molecular studies has added to our knowledge of the diversity and phylogeny the phylum. D. Rabern Simmons was her only PhD graduate student, so she was particularly pleased when he became a post-doc in the James lab, and oversaw the NSF-funded movement of Longcore’s cryopreserved chytrid collection to the University of Michigan, where it is in CZEUM (Collection of Zoosporic Eufungi at University of Michigan). The collection is now in a facility with automatic nitrogen renewal and has grown to contain cultures from Powell, Letcher, their students, and others. Twenty years after the first sequencing to learn the phylogeny of chytrids, Simmons’ 2020 senior-authored paper contains 11 pages of chytrid phylogeny based on the isolates in CZEUM. The JEL culture numbers on the trees indicate contributions from Longcore. She has not stopped looking through her microscope—since 2020 her colleagues have described three new chytrid species based on her isolations.